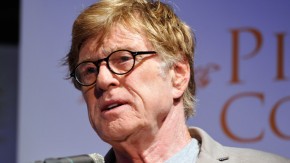 Redford is in Paris at the UN Climate conference encouraging mayors to reduce local emissions while world diplomats try to work out a global climate accord.  The 79-year old  actor says he believes we are running out of time because the planet is running out of resources; a situation he says impacts the most-vulnerable, the world’s indigenous people.

Redford is in Paris in his role as trustee of the NGO Natural Resources Defense Council.