A note that delved into the past – while predicting the future –  has been sold for more than $12,000.

Michael Kydd was a passenger on a Porter Airlines flight on March 20th, 2013 – and passed a note to Trudeau asking “Can you really beat Harper?” 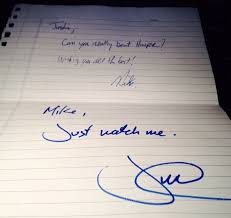 Trudeau’s father replied “Well, just watch me!” on Oct. 13, 1970, when asked by a reporter how far he would go in limiting civil liberties – to combat separatist terrorists during the October Crisis.