Shania Twain has cancelled stops on her Rock This Country tour in New Hampshire and New York after being diagnosed with a respiratory infection.

The internationally renowned Canadian superstar says her doctors advised her to rest for several days. Twain cancelled her Tuesday night concert at the Verizon Wireless Arena in Manchester and her Wednesday night show in Albany at the Times Union Center.

Organizers say they cannot reschedule the shows due to her touring schedule, but that tickets will be refunded at the site where they were purchased.

The tour is set to resume Friday in Canada at the Videotron Centre in Quebec City. 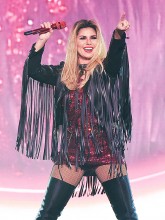 In March, the five-time Grammy winner announced the 48-city North American tour, her first in 11 years.

“This is going to be a big tour for me because it’s going to be my last,” Twain told Good Morning America’s Robin Roberts in March.

“This is my last tour. I’m going to make the most of it. let’s put it that way…I just really want to out with a bang.”