You likely won’t remember him by name but fans of the small screen can recall his face and that laugh. 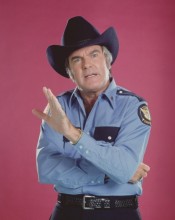 James Best, who played Sheriff Rosco P. Coltrane on TV’s ”The Dukes of Hazzard,” has died at 88 from complications of pneumonia.

Best appeared in may film and TV roles – ”The Caine Mutiny” in 1954, alongside Humphrey Bogart – ”The Left Handed Gun” with Paul Newman, four years later.

He also appeared on ”The Andy Griffith Show,” “Gunsmoke,” and ”Bonanza”.

Best also ran an acting school for over 25 years where he taught the likes of Clint Eastwood, Regis Philbin, Quentin Tarantino and Farrah Fawcett.

In his 2009 autobiography, ”Best in Hollywood:  The Good, the Bad and the Beautiful,” he discussed his feelings toward aging and death.

”The only thing that makes me sad about having so little time left is leaving the people I love and those who love me,” he wrote.  ”There are also films and other projects that I want to get done, and there are always fish that need catching.”