MAY THE FORCE BE WITH HIM 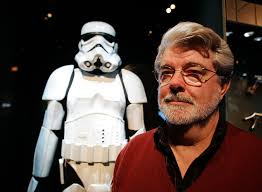 The Force is apparently not that strong with the planned Lucas Museum for Narrative Art.  A Chicago judge has ruled that a local conservation group could move forward with a suit to block construction of George Lucas’ radical new museum on the city’s lakefront. The lawsuit, filed in November, claims the planned site for the institution is part of a protected waterway belonging to the state and cannot legally be privately developed.
The museum is slated to be built on Chicago’s museum campus near the Field Museum, Shedd Aquarium, and Adler Planetarium.  The mayoral runoff election April 7 may decide the future. The current mayor Rahm Emanuel supports Lucas project and its planned location, his challenger does not.