THAT SOPHIE WAS A PRETTY BIG GIRL

London’s Natural History Museum has worked out the weight of one of the world’s most complete Stegosaurus skeletons. 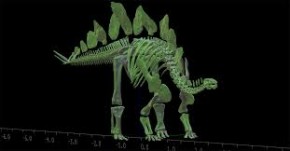 Scientists in Britain say “Sophie”, as she’s known, was a young adult when she died and weighed a tidy 1.6 tons about the same size as a small rhinoceros.  The scientists worked out the dinosaur’s body mass after creating a 3-D digital version of its skeleton, calculated the volume of flesh around the bones and then compared the data with information from similar-sized modern animals.  The skeleton, which is 85 per cent intact, greets visitors entering the museum,  It was discovered in 2003 in Wyoming.  It is one of the most instantly recognizable dinosaurs thanks to a row of sharp bony plates along its spine.