The Vienna State Opera says that famed Austrian tenor Waldemar Kmentt has died at the age of 85.   Kmentt died on Wednesday in Vienna, where he began and ended an opera career that took him across the globe. 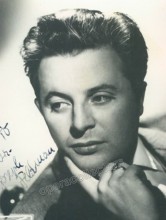 Kmentt sang almost 15 hundred performances at the Vienna State Opera; among his most popular roles were Tamino in The Magic Flute, Jenik in The Bartered Bride, and the title role in The Tales of Hoffmann.