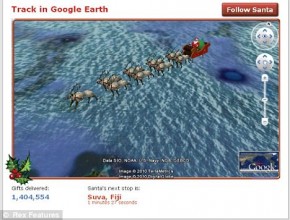 NORAD is tracking Santa Claus as he makes his rounds today.

In the days of the Cold War, Santa always caught NORAD’s trackers off-guard with his sudden appearance on radar. So now they coordinate the trip with the North Pole.

Canadian Lieutenant-General Alain Parent is the Deputy Commander of NORAD. He tells CP24 they scramble CF-18s from Baggotville and Cold Lake to intercept Santa, who normally travels at the speed of starlight. He says, as a courtesy, Santa always slows down to greet the Canadian fighter jets.

Parent says they are able to track Santa through a worldwide series of Santa Cams and radar that picks up the infrared signals from Rudolph’s nose.

And, by the way, you can track Santa’s progress online here.