Billy Joel is being honoured in the U.S. capitol once again as he receives a national pop music prize,  one year after being awarded the Kennedy Center Honors. 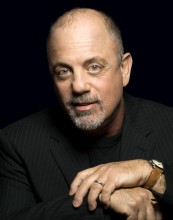 The Library of Congress is paying tribute to the singer and songwriter known as The Piano Man with the Gershwin Prize for Popular Music. The lifetime achievement award is named for the songwriting duo of George and Ira Gershwin.

The 65 year old Joel will perform tonight in a concert near the White House along with Tony Bennett, Gavin DeGraw, Kevin Spacey and others.

Joel says he’s looking at the prize through the eyes of his mother who died this year. Joel says she would have gotten a kick out of him receiving the Gershwin Prize.