The attack, by two Palestinian cousins, armed with meat cleavers and a gun, left three American-Israelis and one British-Israeli dead. 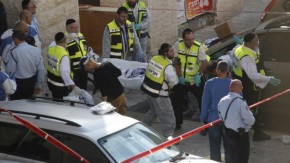 A Canadian-Israeli man is among the six injured during morning prayers at the synagogue in East Jerusalem.

He’s identified in the media as 53-year old Howie Rothman, who grew up in Toronto but has been living near the synagogue  in an ultra-Orthodox neighbourhood with a large population of English-speaking immigrants.

Israeli Prime Minister Netanyahu’s ordered crews to demolish the homes of the attackers.

Prime Minister Harper and Palestinian President Abbas are among leaders denouncing the attack.

The Popular Front for the Liberation of Palestine has claimed responsibility.

It’s the bloodiest attack in years in the city which was already on edge as tensions rise over its most contest holy site.