Doug Ford is ready to take part in his first Toronto mayoral debate.  His communications director, Jeff Silverstein,  tells CP24, there is very little preparation needed because Doug has been debating for years.  “The man’s had a lot of practice debating,” Silverstein explained, “and everyday in council there’s an opportunity to debate the issues.  So I think you’ll see a very strong Doug Ford, who is very capable and very familiar with the issues.  So, there’s not a lot of coaching that needs to happen.  I think he’s looking forward to beginning this campaign in earnest.” 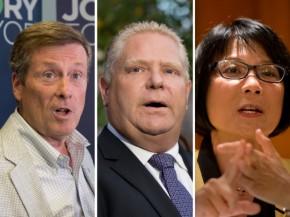 Doug Ford has some work to do to catch up to frontrunner John Tory.  A new Nanos Research poll suggests Tory has 49 percent of decided voter support, with Ford at 27 percent and Olivia Chow at 24 percent.  Pollster Nik Nanos says “John Tory will need to blow up.  He’ll need to make a serious mistake (in order to lose this election).”

Nanos says transit and gridlock continue to dominate the campaign.  He says as a result, Tory must ensure his transit plans are bulletproof.  Beyond that, he says it would be a personal mistake or revelation that would take Tory down as the frontrunner.