The first Broadway musical to break the 3,000-show mark opened 50 years ago today. 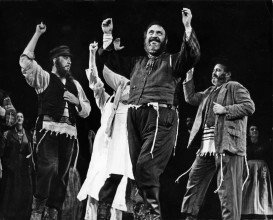 Fiddler on the Roof was written by Jerry Bock and Sheldon Harnick, with a libretto by Joseph Stein. It’s based on Tevye and his Daughters and other stories by author Sholem Aleichem.

Fiddler on the Roof won nine Tony Awards and was Broadway’s longest-running show for more than ten years. It is now number 16 in terms of longevity.

It has been revived on Broadway four times and was made into a movie in 1971 by Toronto producer/director Norman Jewison.