ROB FORD THE MUSICAL: SHOW WILL GO ON

A new musical poking fun at Toronto’s mayor is going to open tonight as planned, despite the diagnosis. 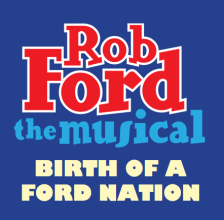 But producers of Rob Ford the Musical: Birth of a Ford Nation say they are scrapping a planned party and red carpet. They will also dim the marquee lights before the show.

Producer Brett McCaig says they did make some last-minute changes in light of the mayor’s diagnosis. And he adds Canadians have always responded to difficult times with humour.

McCaig says the show is funny, but also sympathetic to the mayor’s problems.

The production will be collecting donations for the Canadian Cancer Society at each show.

Rob Ford the Musical: Birth of a Ford Nation is scheduled to run at Factory Theatre through Sept. 28.