The Helsinki Philharmonic has become one of the few orchestras to be led by a female chief conductor. 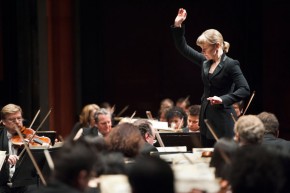 Helsinki has announced that Susanna Malkki will take over the podium in 2016.

She becomes one of the few female music directors of symphony orchestras. The Baltimore Symphony’s Marin Alsop is the only principal conductor of a major US orchestra. And Canada only has Tania Miller at the Victoria Symphony.

The Helsinki-born Malkki trained as a cellist before becoming a conductor.