Placido Domingo has been forced to do something he rarely does: cancel performances. 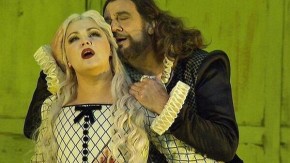 The legendary Spanish singer has cancelled the remaining three performances of Il Trovatore and a recital at the Salzburg Festival because of a bladder infection and respiratory problems.

It’s a new production of the Verdi opera starring the 73-year-old Domingo and soprano Anna Netrebko. Il Trovatore hasn’t been presented in Salzburg since the Sixties, and all six shows had sold out quickly.

Domingo’s stand-in will complete the run.