GINO VANNELLI TURNS TO JAZZ IN HIS ZOOMER YEARS

From his pop days in the 1970s and 80s, Gino Vannelli is now embracing jazz.  Gino’s new album is called Live in L.A.  He dropped by the ZoomerPlex for a visit with The New AM 740’s Happy Gang and talked about how his music has changed.  “The songs evolved that way a few years ago, and as they evolved that way, people came up to me and asked me or said to me, why don’t you record them?  So we started out recording an album called Best and Beyond, and then about six months ago, we did Live in L.A.,” Gino explained, “for me it just seemed a logical extension of where the songs ought to go because I was brought up with so much jazz and classical.” 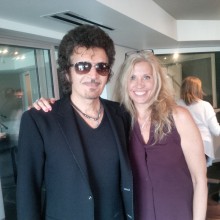 (Gino was kind enough to indulge me with a photo op during his visit to AM 740!)

Gino Vannelli is headlining this weekend’s Jazz on the Mountain at Blue in Collingwood, Ontario.  See more of what he’s doing these days online by clicking here