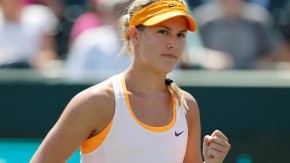 With the straight sets victory, Bouchard’s now gone six matches at the 2014 Championships without losing a set.

Bouchard says ”I expect a tough challenge … I think I can play even better than I played today.  I just want to give it my best effort.  I want to leave it all on the court and see what happens.”

Milos Raonic hopes to follow Bouchard into the finals.

He faces Roger Federer in the semi-finals tomorrow morning.