So what’s the secret to a happy marriage?  A new British study suggests “sleeping naked” leads to more happiness in a relationship.

The findings of the poll for Cotton USA will be good news for many, since four in ten people now sleep naked and almost half – 45 percent – of over 55s do so. 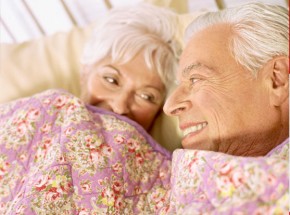 The research also reveals half of us are bothered when people eat in bed, 59 percent don’t like dirty laundry on the floor and 23 percent hate it when their partner wears socks in bed.