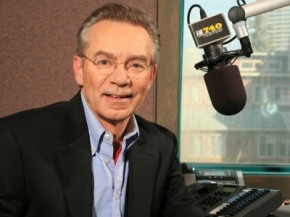 A legend in the radio business has retired.  Our very own Bill Gable has decided to leave radio after forty-six years of entertaining audiences at stations across North America.  Bill spent six of those forty-six years as co-host of The Happy Gang here at the New AM 740.  This morning, Bill explained why he’s decided to hang up his headphones.  “I’ll have more time to spend with family, who are distant from Toronto, and the hours, ah, the older I get, it’s a little tough,” Bill laughed, “I’m just going to miss everybody tremendously.  I’ve never been treated better anywhere I’ve ever worked in my career.”

Bill Gable got his start in radio as a teenager in Allentown, Pennsylvania and went on to work in the biggest markets in North America, including Detroit-Windsor at CKLW (The Big 8) in the 1970s.  “All the American DJs, who were already in radio, they aspired to work there.  To them, that was maybe one of the five best radio jobs in the world that you could get.”

Bill plans to see more of his family and close friends and spend more time on the golf course.  But it might be hard to keep him off the radio for good.  “I hope I don’t wake up someday and say, ‘I made a huge blunder’, Bill joked.  Although Bill made his retirement public today, he let his employers at ZoomerMedia know about his plans a month ago.  ZoomerMedia founder Moses Znaimer encouraged Bill to stay on and kidded with him that “retirement is not the zoomer way!”