Australian Prime Minister Tony Abbott says a massive search for a lost Malaysia Airlines jet is being conducted in “the most inaccessible spot imaginable.”  Malaysia’s transport minister says new satellite imagery dated a few days ago spotted 122 potential objects in waters way off Perth, Australia.  Some objects were one metre in size, others were as large as 23 metres.  Yesterday’s bad weather has cleared and planes and ships are again combing a massive section of the Indian Ocean in the hopes of finding even a single piece of Flight 370 that could offer tangible evidence of a crash. 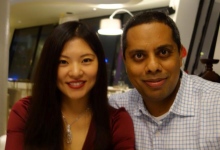 There were two Canadians aboard the missing Malaysia jetliner.  42 year old Muktesh Mukherjee and his wife 37 year old Bai Xiaomo were heading home to Beijing after a beach getaway in Vietnam. They had posted pictures of their holiday shortly before boarding their flight.  The couple’s two young sons were waiting for them at home. Mukerjee met his wife while on a business trip in China in 2002.  They lived in Montreal before moving to Beijing.  Mukherjee’s grandfather, a former Indian government minister, died in a plane crash outside New Delhi in the 1970s.  His family were praying the couple had not suffered the same fate.  “Miracles do happen.  We pray it will happen this time and Muktesh will come back to us,” his uncle, Manoj Mukherjee, in India told AFP news agency.