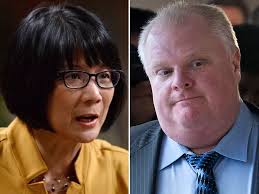 Mayoral challenger David Soknacki was not as tough on Chow, welcoming her to the race to unseat Rob Ford.  “I have great respect for Ms. Chow.  I’m sure she’ll be a very formidable candidate and competitor and look forward to her entering the race.”

Olivia Chow resigned her seat as NDP MP for Toronto’s Trinity-Spadina, and then had a staff member register her candidacy for mayor at Toronto City Hall.  She also addressed the federal pension issue, saying would donate her taxpayer-funded pension to charity if she is elected mayor.  Chow also launched a campaign video which highlights her accomplishments and plans.  You can see it here.

Chow was a Toronto City Councillor for 15 years prior to going to Ottawa in 2006.  She officially launches her campaign ahead of October’s election this morning in St. James Town where she spent and her family lived after immigrating from Hong Kong.