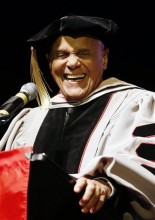 The man who introduced mainstream North America to the music of the islands has received an honourary doctor of music degree from Boston’s Berklee College of Music.  Singer, songwriter and activist Harry Belafonte was honoured last night during a concert at Berklee.  Students and faculty members performed at the celebration of Belafonte’s life and music, from Banana Boat Song to We are the World.  Now 87, Belafonte was a confidante of Martin Luther King Jr. during the civil rights movement.  In the 1980’s, he helped start the USA for Africa project to fight hunger, and also pushed for an end to apartheid in South Africa. Other recipients of Berklee’s honourary doctorate have included Duke Ellington, Dizzy Gillespie, Steven Tyler, Willie Nelson, Aretha Franklin and Quincy Jones.