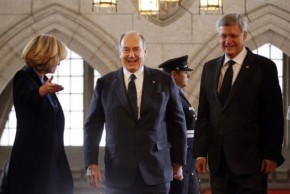 Federal opposition politicians are accusing the Harper Conservatives of disregarding the Aga Khan’s message of pluralism by leaving them out of an event in Toronto today which features the spiritual leader.  The 77 year old hereditary leader of the world’s Ismaili Muslims is expected to address a crowd of community members, chief executives and Canadian government officials at Massey Hall this afternoon.  The Prime Minister and at least two Conservative cabinet ministers are planning to attend the event.  But both NDP leader Tom Mulcair and Liberal Leader Justin Trudeau say they were not invited to take part in the Toronto event.  Mulcair says “the Aga Khan is a model for working together and reaching out to other people.”  He says “it’s a shame that for the event in Toronto, no one else seems to have been invited.”

The Aga Khan was welcomed with repeated standing ovations in a packed House of Commons yesterday where he said his foundation will  help Canada celebrate its 150th anniversary in 2017.  Prime Minister Stephen Harper introduced him as a tireless humanitarian and applauded him for development partnerships in Africa, Asia and in Afghanistan.