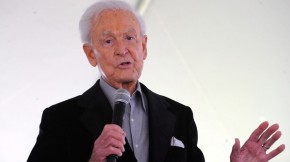 He successfully helped the elephants at the Toronto Zoo.  Now 90 year old Bob Barker is pushing Ontario to scrap plans to bring back a spring bear hunt. The animal activist and former TV game show host says cubs starve to death when their mothers are killed in what he calls a barbaric hunt.  “You don’t have to be a rocket scientist to realize you’re murdering every cub,” Barker explained, “I just don’t understand how they can possibly do this.  I mean I should think they individually rise up and say no.  They did in 1999.”  That’s when the bear hunt was cancelled in Ontario.

Ontario’s Natural Resources Minister David Orazietti says he “has a ton of respect for Bob Barker”, but questions where he’s getting his facts.  A pilot project is planned in Ontario this spring with a limited hunt in eight of 95 wildlife areas.  It’s hoped the hunt will reduce the number of emergency calls and instances where police are forced to shoot nuisance bears.  Orazietti says it’s a targeted approach to deal with a public safety issue, noting some kids can’t go out for recess because bears are in their playground.