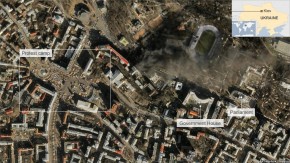 More violence in Ukraine’s capital of Kyiv.  Street fighting between protesters and police is raging today.  A medic for the protesters says that at least 70 activists have been killed in today’s battles.  The renewed conflict comes despite a truce called by Ukraine’s protest leaders and embattled President Viktor Yanukovych.  ABC News reporter Bruno Roeber says “I have seen bodies being dragged back on makeshift stretchers or being dragged along the ground by groups of men.”

The head of Kyiv’s city administration has resigned from President Viktor Yanukovych’s ruling party today.  The city chief said he’s leaving the Party of Regions because “we must be guided only by the interests of the people, this is our only chance to save people’s lives.”

The latest violence happened as the foreign ministers of three European countries met separately with Yanukovych and the opposition leaders.

The two sides are locked in a battle over whether Ukraine’s loyalties should be with Russia or Europe.  Two days of street violence earlier this week killed at least 28 people.