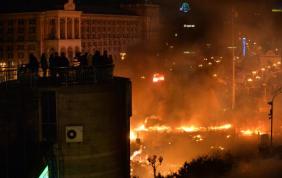 Fires continue to burn in central Kyiv.  Protesters are occupying about a third of Independence Square in the Ukrainian capital after a bloody day.  At least 25 people were killed and more than 240 hospitalized in yesterday’s street battles.  Police moved in with stun grenades and water cannons as some 20,000 protesters lit fires to create a barricade. One man said, “we are tired of the authorities and they have to be removed. I am not afraid and this is our destiny.”

Meantime, the European Union is calling an extraordinary meeting of foreign ministers to determine reaction to the escalation of violence in Ukraine.  European Commission President Jose Manuel Barroso said today he expects the EU to adopt “targeted measures against those responsible for violence and use of excessive force.”

Here in Toronto, a show of support for demonstrators took place on Lakeshore Avenue outside of the Ukrainian consulate.  Peter Schturyn, with the Ukrainian Canadian Congress, says they are “shooting on peaceful protesters using live ammunition, and it’s clear the purpose is really just to get the protesters off the streets, even though they’re protesting very similarly to the way we are now; peacefully in prayer and song.  So we’re shocked and we know the whole world is shocked.”

From the North American leaders’ summit in Mexico, Prime Minister Harper is calling on Ukraine’s government to work with its opposition to achieve a peaceful solution to this nearly three-month-old crisis.