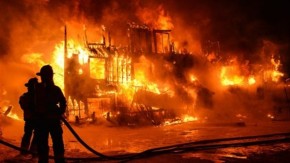 Tragic news from eastern Quebec.  Provincial police in that province confirm at least three people are dead and about 30 missing in a major fire at a seniors residence about 30 kilometres east of Riviere du Loup.  The fire broke out about 12:30 this morning in the community of L’Isle-Verte.  Initial reports said 20 residents have been transported to safety, but it was unclear how many residents were missing in the 52-unit structure. Several fire departments in the region were called in to help extinguish the blaze, which completely destroyed the building.