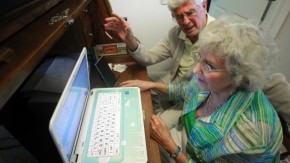 Canadians over the age of 65 are still not embracing the internet as a source of entertainment.  Statistics Canada reports that 87 per cent of Canadians between 15 and 24 regularly listen to music downloaded from the Internet. Only ten per cent of those over 65 download their music. The vast majority prefer to listen to traditional forms of music, such as CDs.  Watching TV, movies, or video clips shows a similar contrast: 80 per cent for young Canadians, but only ten per cent for those over 65.

Statscan also suggests that older Zoomers are more likely to read conventional books, while young Canadians are turning to e-books. But there are no stats to back that up, because data isn’t collected on e-book use.