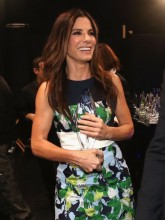 Sandra Bullock has won four trophies at the People’s Choice Awards for a movie that debuted here in Toronto.  Bullock, who turns 50 this year,  stars in Gravity.  She was the night’s top winner, being named favourite movie, comedic and dramatic actress.  She also shares the favourite movie duo award with Gravity co-star George Clooney.  In the film, debris smashes into a shuttle while Bullock’s character is making repairs during a spacewalk.  She hurtles into space with George Clooney’s character in her ear on the radio.

Gravity was viewed by former Canadian astronaut and Space Station commander Chris Hadfield at the Toronto International Film Festival this past September.  He joked after seeing it, that “fortunately the five months I spent on the space station went way calmer.”  Hadfield called the movie’s visuals “spectacularly good” and he said, “if I were to ever fly in space again, I want to fly with Sandra.”