25-YEAR-OLD GETS MILLION-DOLLAR PICASSO FOR $150

A 25-year-old American is the proud owner of an original Picasso.

A charity devoted to saving the ancient city of Tyre had acquired Picasso’s Man with Opera Hatand offered it as a prize in a raffle. 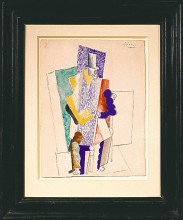 Pennyslvania resident Jeffrey Gonano bought one of the 50,000 tickets because he wanted some art for his wall. His ticket was chosen as the winner.

The painting is valued at a million dollars.

Despite the windfall, Gonano says he will keep the painting.