Father Bill Moore, a Catholic priest and prominent abstract expressionist who spent decades spreading spiritualism through his paintings, has died at 71 from prostate cancer. 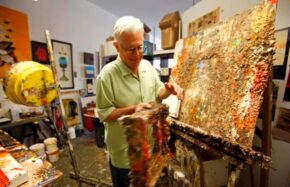 Ordained in 1975, Father Moore continued to paint and sometimes conduct Sunday Mass until recent months.
A retrospective My Last Art Beat; Still Touching and Feeding Souls  is on exhibit at a California museum until the end of this month. Father Moore contributed some final, small works to it as recently as last month.
Moore was also a serious fan of rock music, who could discuss at length the works of Van Halen and Bruce Springsteen.