FORD NOT HAPPY WITH HECKLING NDP

Doug Ford has some choice words for NDP leader Andrea Horwath calling her a “very nasty, unhappy person.” The Premier was not pleased to hear New Democrats heckling during his tribute to former Premier Kathleen Wynne in the legislature Tuesday. 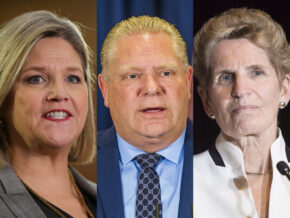 “Kathleen Wynne went to acknowledge Andrea and she kind of sloughed her off, who does that? It’s unfortunate Ms. Horwath decided to act that way,” Ford told reporters.
Ford calls the incident disrespectful and uncalled for.
Wynne revealed she won’t run in 2022. During his tribute, the  Premier called Wynne a kind person and a trailblazer by becoming the first female premier and first gay Premier.