The Writers’ Trust of Canada has released this year’s five finalists for the Hilary Weston Writers’ Prize for Nonfiction. 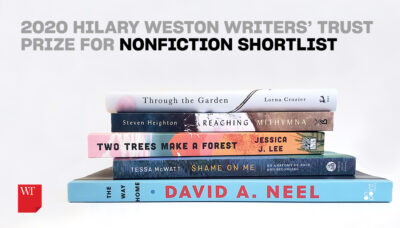 Lorna Crozier, Steven Heighton, Jessica J. Lee, Tessa McWatt, David A. Neel
The trust says with the discontinuation of the RBC Taylor Prize, and this year’s postponement of the Governor General’s Literary Awards, the trust’s prize is the only national award recognizing Canadian writers who published literary non-fiction in 2020.
In all, 107 titles were submitted by 65 publishers for contention.Finalists receive $5,000 and the eventual winner announced November 18th, gets $60,000.