ACTOR RYAN REYNOLDS WITH A WARNING FOR YOUNG PEOPLE IN B.C.

In light of a spike in COVID-19 cases in British Columbia, Canadian actor Ryan Reynolds, who was born in B.C, is helping to send a message about partying during a pandemic. 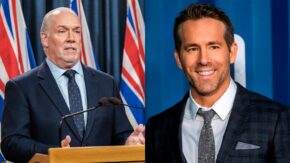 Reynolds posted a video to Twitter, framed as a phone call to Premier Horgan where he pleads with young people to avoid partying. With his signature wit, he jokes that he doesn’t want young people to kill his mother or famous B.C residents like David Suzuki. But his message also carries a serious tone.

Those aged 20-29 are now seeing the largest increase in infections. Premier Horgan also called on another famous actor from B.C for help, Seth Rogen.

Listen to his message here