Doug Ford took his daily pandemic briefing on the road again, this time with an announcement on long term care. The Premier says his government will build 322 new long term care beds in Durham Region, at the site of the Ajax Pickering hospital.
The home will be completed by the next year. 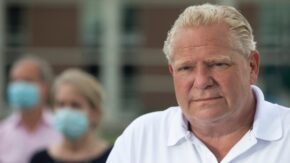 Ford was asked when he’ll announce his government’s long awaited independent commission into long term care, that was promised to begin this month. Minister Merrilee Fullerton would only say that it’s ‘forthcoming.”

Meantime, Doug Ford says there are no plans to pull any regions back a step in the province’s reopening, despite new outbreaks in some areas that have moved into Stage 3. Ottawa and Sudbury are reporting new cases of the virus in recent days.

But when asked today whether the new outbreaks would lead to a rollback, Ford said that wasn’t in the province’s plans.