Calling it ‘historic levels of funding during unprecedented times’ the Ford government along with the federal government have announced $4 billion for municipalities as part of the COVID-19 safe restart agreement. Finance Minister Rod Phillips says the money will be rolled out over the next few weeks.

“Up to $2 billion dollars will be available to relieve municipal operating pressures, $777 million from the federal government with 1.2 billion from province,” Phillips told reporters at the daily pandemic briefing. 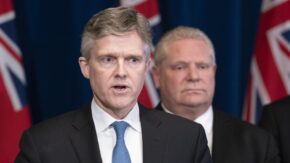 “And $2 billion will be available to address shortfalls in in transit systems with $1 billion dollars from both the federal government and Ontario.”

The money will also go to shelters, food banks, and public health.

Education was not listed as part of the funding, but Premier Doug Ford says his government will have more to say on that in the coming days.