Ontario Premier Doug Ford is urging young people to avoid going to a party, after a spike in COVID-19 cases in those under 39.

“It might not be you, but it’s going to be your parents, or your grandparents or your neighbours or friends,” said Ford.

“You’re hurting people by doing this and go back to the golden rule, wear a mask and if you don’t have a mask, keep six feet apart.”

More than 50% of new cases reported Tuesday are among people 39  and under.

Meantime, the province has announced an accelerated plan to build long term care homes, faster. Premier Doug Ford says there are 128 projects in the works including two new seniors homes in Mississauga that will be ready for residents next year. 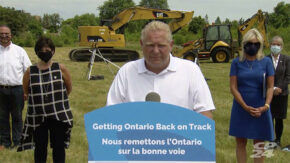 The Ford government is investing 1.75 billion dollars over the next five years.