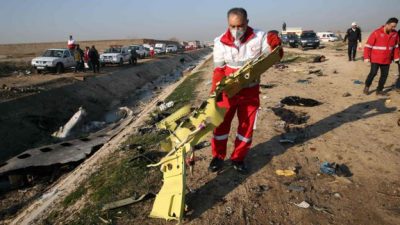 Iran’s supreme leader is now offering his condolences after his country’s armed forces announced that they unintentionally shot down a Ukrainian passenger plane, killing all 176 people on board including 57 Canadians.

This news comes after days of denials from Iranian officials.

The military now says it mistook the plane for a hostile target calling it “human error”.

On Saturday Ayatollah Ali Khamenei expressed his “deep sympathy” to the families of the 176 victims, and called on the armed forces to “pursue probable shortcomings and guilt in the painful incident.”

The passenger plane was shot down amid heightened tensions between the U.S. and Iran stemming from an American airstrike that killed Iran’s top general.

In a statement issued on Twitter through his communications director, Trudeau says “Canada’s focus remains closure, accountability, transparency and justice for the families and loved ones of the victims.”

Fifty-seven Canadian citizens were killed in the crash, and of the 176 people on board, 138 were coming to Canada.