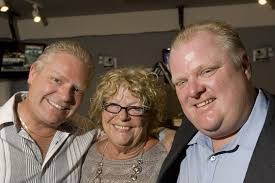 Diane Ford was laid to rest on Saturday.  Hundreds of mourners gathered in the Toronto Congress Centre to say goodbye to the Ford family matriarch.

The mother of Ontario Premiere Doug Ford and former Mayor of Toronto Rob Ford died last week after being diagnosed with cancer.

Ford’s family was attended by politicians, dignitaries and community groups from across the Greater Toronto Area and Premiere Doug Ford said his mother was a woman of the people who loved her community dearly.

“As many of you know, my mother Diane was the matriarch of our family.  She guided us through the good times and through the tough times.  And until her last day, our family never made any major decision without her.  And my mother always guided by her three principles, family, community and giving back through charity.” said Ford, his voice trembling at times during his speech.

Ford says his mother was all about her community and always had an open door policy.  He also described his mother as the rock for his father throughout his career in business and in politics.