HAPPY THANKSGIVING TO OUR AMERICAN NEIGHBOURS

It was windy in New York City but the iconic Macy’s Thanksgiving Day Parade went ahead, although the big balloons flew a little lower than normal for safety. The parade featured about 8,000 marchers, 24 floats, marching bands and of course, Santa Claus. About 3.5 million spectators gathered to watch the parade march through the city’s streets. Canadian singer Celine Dion was among many performers taking part. 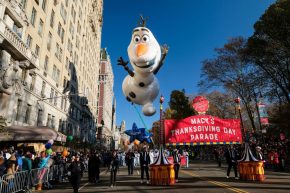 But elsewhere, high winds grounded the large balloons. Philadelphia’s annual Thanksgiving Day parade was scrapped. A wind advisory from the National Weather Service was in effect until 6 p.m. Thursday with projected winds of up to 48 km and gusts up to 80 km. The weather service cautioned that gusty winds could blow around unsecured objects.