Information pickets are going up at Ontario’s high schools beginning next week as part of a work to rule campaign. Ontario Secondary School Teachers Federation president Harvey Bischoff won’t say how long this job action will last but adds the union would ‘respond’ to any further bargaining. During this time, teachers won’t write comments on reports cards, attend unpaid meetings, or take part in provincial standardized testing. Earlier, the education minister announced the province was reducing the number of mandatory online courses from four to two but Bischoff calls the concessions from the province “stumbling halfway towards the right solutions.” He adds the Ford government has unilaterally eliminated thousands of educators from the system. The information pickets will be held before and after school and during the lunch period. 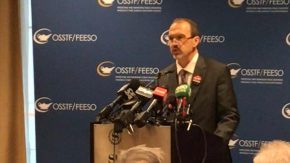