Mike Babcock is out. Sheldon Keefe is in.

Late Wednesday, the Toronto Maple Leafs announced head coach Mike Babcock was fired after a disappointing 9-10-4 start to the season. 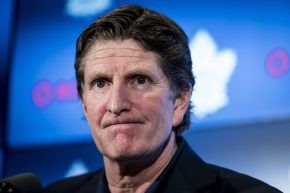 The 56-year-old Babcock signed an eight-year, $50 million contract in May, 2015. He guided the Leafs in 351 games over five seasons. Team President Brendan Shanahan issued a statement that reads in part, “Mike’s commitment and tireless work ethic has put our organization in a better place and we are extremely grateful and appreciative of the foundation he has helped us build here.” Babcock released a statement after his firing, “I’m disappointed. We didn’t have the start to the year we wanted and that’s on me. I want to thank the fans, media and city. It was spectacular. I loved every second of it and I wish the new group nothing but success.” The Maple Leafs haven’t won the Stanley Cup since 1967. The team returns to the ice Thursday night in Arizona to play the Coyotes.