DOOBIE BROTHERS ARE "TAKIN' IT TO THE STREETS" AGAIN

The Doobie Brothers are reuniting with former lead singer Michael McDonald for a 50th anniversary tour starting next June, that includes a stop in Toronto. 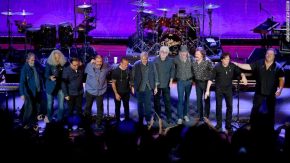 McDonald surprised fans at The Doobie Brothers concert in Nashville Monday night with a performance of Takin’ it to the Streets. It will be the first time in almost 25 years that McDonald will be touring with them. They’ll perform at Toronto’s Molson Amphitheatre next July 19th. The 30-city tour will start on June 9 in West Palm Beach, Florida, and wrap up on October 10 in Houston. The band’s other hits include Listen to the Music, China Grove, What a Fool Believes and Minute By Minute.