N-D-P Leader Jagmeet Singh says Liberal minority government needs his party’s support to survive. The New Democrats lost half their seats in the October election, but Singh maintains there will be times the Liberals will need their votes. 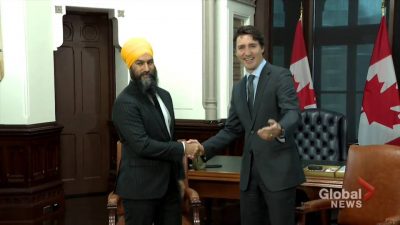 During a meeting between Singh and Prime Minister Thursday, the pair discussed the expectations for the next sitting of the House of Commons. Singh says his party’s priorities include universal pharmacare, dental care and fighting climate change. The
N-D-P Leader is also dismissing the notion that the Liberals could work with the Bloc Quebecois because the Bloc isn’t concerned with national interests.