Ontario’s 2019-2020 deficit falls to $9 billion from 10.3 billion and the Ford government is boosting spending by $1.3 billion with an extra $279 million for autism treatment and an additional  $400 million into healthcare. There’s also an extra $310 million for social services, including a child benefit the province had planned to stop. The government is also cutting small income taxes. Wednesday’s fall fiscal update shows a government trying to undo the damage caused by a year of cuts. In reacting to the news, Opposition leader Andrea Horwath says “Doug Ford’s cruel and callous cuts continue and he hasn’t increased health funding beyond the drop in the bucket needed to cover OHIP billings. Interim Liberal Leader John Fraser says the government needs to accurately report deficit numbers and that some of today’s funding is not new. Finance Minister Phillips say the goal is a balanced budget by 2023. 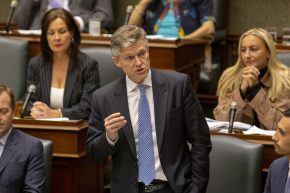