Well wishes are flooding in for former Ontario Lieutenant-Governor David Onley, who has undergone brain surgery to remove a benign tumour. The operation was reportedly a success but the 69-year-old Onley faces a long recovery. 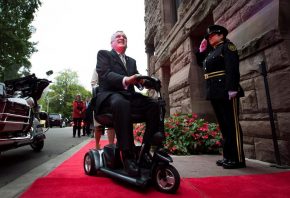 Mayor John Tory, Premier Doug Ford and Opposition Leader Andrea Horwath are among the many friends and colleagues wishing him well on social media. Onley was Lieutenant-Governor between 2007 and 20-14 and received the Order of Canada two years ago. He was also the first newscaster in Canada with a visible disability. As a survivor of childhood polio, Onley used his high profile positions to help remove physical barriers to the province’s 1.5 million people with disabilities, as well as focus on other issues affecting the disabled, including obstacles to employment and housing.