Sightseers at  North America’s most famous tourist sites are getting more than they bargained for. A powerful storm that blew through Niagara Falls on Halloween night, has dislodged an old iron boat that’s been sitting rusting on the rocks in the very same spot in the river for over a century. It’s now 150 feet down river at Horseshoe Falls on the Canadian side. Jim Hill with the Niagara Parks Commission says it’s anyone’s guess what happens next. “It could be stuck there for days, or it could be stuck there for years, it’s anyone’s guess,” says Hill. 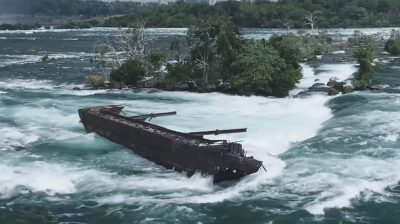 The 80-foot vessel has been a tourist attraction for decades after it apparently broke away from its tugboat in 1918 and eventually getting stuck in the upper rapids. Ever since it’s been deteriorating in the current until it began moving on Thursday. Authorities now fear the current could send the vessel over the Falls.