REMEMBERING OUR MILITARY PAST THROUGH THE EYES OF VETERANS

The Canadian Legion’s Poppy campaign is well underway. The small lapel pin is widely recognized as a symbol of Remembrance since it was first adopted in 1921. 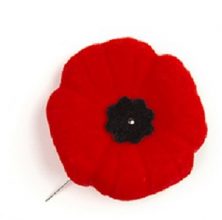 A group of veterans who live at Sunnybrook’s Veterans Centre gathered in the newly dedicated pub on the bottom floor to reminisce about serving their country. 97-year-old Digger Gorman was exposed to the horror of war at a very young age. His uncle committed suicide after suffering from post traumatic stress disorder after the war. Digger went on to join the Navy and part of his tour included a dangerous mission in the North Atlantic during World War II where the cold  weather was challenging. This group – all in their 90’s –  share stories of service with incredible recall. Mary Jarvis is a former army driver, tasked with transporting injured soldiers. She credits young children with carrying on the legacy of the aging vets. Richard Radcliffe, president of the Sunnybrook Veterans Council, who keeps busy toiling away on his IPad, puts it down to share his story. 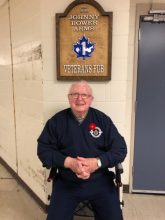 He too served in the Navy for close 30 years. “I enjoyed every minute of it,” says the affable 91-year-old who says the secret to his long healthy life is to keep active. At 97, Stan Dinney is the chattiest in the group. Now celebrating his 4th anniversary living at the Veterans Centre, Stan says he gets overwhelmed on Remembrance Day by the sea of Canadian flags planted on the lawn at Sunnybrook. An inspiring group, all of them happy and healthy. For more on you can support the poppy campaign, click

Listen to a report from Christine Ross.