An old painting found in the kitchen of an elderly French woman has made her a multimillionaire. 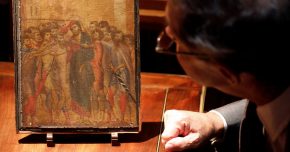 The masterpiece by 13th-century Italian painter Cimabue, Considered the father of the Renaissance, HAS sold for almost $27 million dollars. The auction sale price is a world record for a primitive, or pre-1500 work. An auctioneer spotted the painting in June while inspecting a woman’s house in northern France and suggested she bring it to experts for an evaluation. It hung on a wall between the kitchen and dining room. Experts had expected to fetch up to $6 million but were off the mark because no Cimabue had ever been on sale so there was no reference. Not surprisingly, the painting’s discovery has sent ripples of excitement through the art world.