The Liberals and New Democrats both confirm their party leaders had a private conversation about Justin Trudeau’s use of brown- and blackface makeup on at least three occasions decades ago. Shortly after photos surfaced last week of a costumed Trudeau with his face darkened, he apologized for actions he now concedes were hurtful and racist, and said he wanted to talk to the only leader of colour, Jagmeet Singh personally. Neither party is planning to release what was said during the conversation. Meantime, on the election trail Wednesday, both Justin Trudeau and Jagmeet Singh are campaigning in B.C. Conservative Leader Andrew Scheer is campaigning in Quebec and Green Leader Elizabeth May is to reveal the financials behind her party’s platform in Halifax. 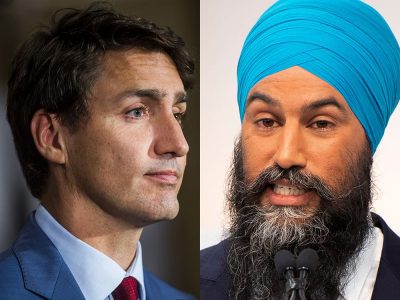